Happy New Year! A bit late I know, things really ran away from me over the last few weeks.


It was a very busy run up to Christmas, I began supplying several new galleries and took part in four Christmas exhibitions. But then the littlest Shepherd caught chicken pox. Its not usually a big deal, not fun either though. It became more complicated when he developed an infection in the gland in his cheek and was admitted to hospital where he was on IV antibiotics for 4 days. I stayed in with him, and Sheps came in and stayed with us each day.

This happened on the 12th December, luckily I had despatched all of my wholesale orders but my retail orders and Not On The High Street orders still needed completing and packing. I suspended both shops so that no more purchases could be made. As we were in a room of our own at the hospital - so that the other children wouldn't catch the pox - I set up a wee despatch area, 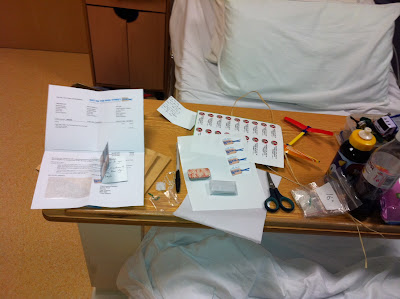 and managed to get everything out on time. We were sent home with another two weeks of antibiotics. His cheek was still swollen and very sore but he was much happier at home! Gradually over the next few days he began to feel better and the chicken pox had just about cleared up. It had been a very stressful couple of weeks so on the 23rd Sheps and I decided to take the kids to the cinema to see Arthur Christmas and kickstart the festivities. Towards the end of the film a little voice piped up "Mummy, I've got a really itchy bit on my shoulder..."
I think you know where this is going. A certain little girl got chicken pox for Christmas and was covered head to foot.

Despite all of this it was a lovely Christmas, the children really enjoyed it even though every time they turned around I was ready with a thermometer or an other spoon of medicine!

After all of that its good to get back into the swing of things, the children are back at school and I'm back in my workroom. I like January its a new year and a fresh start. I spent today working on new designs for my Seedhead brooches. Pics coming soon!

Goodness! Glad the little ones are better now :)

oh no! glad you managed to have a great Christmas. Takes you back to what it's all about really, just you and family. Loving the Notonthehighstreetbutinthehospital work area! :)

Another challenge is ahead. Goodluck to all of us.