ok I made the last one up -we saw precious little sun but we are back from a lovely, relaxing holiday in Scotland. We stayed near Oban in a little wooden lodge. The view was beautiful - I took this on the last, finest morning:/ 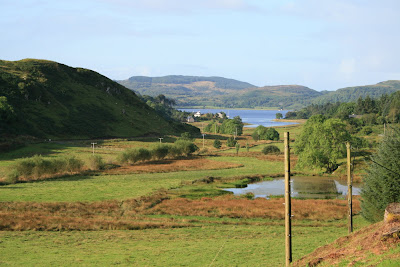 We spent the week dodging rain showers, collecting treasure from the beaches, exploring tiny villages, hopping on boats to visit nearby islands and to see these chaps 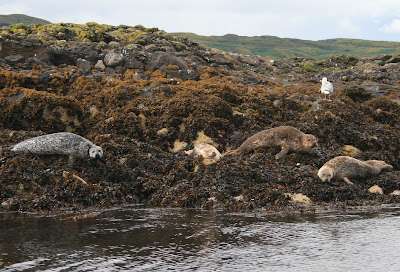 As we were approaching the island a little voice piped up "Ooh look, I can see a shark!" As we sniggered at such an idea and we started explaining that sharks are very rarely seen so close to shore and blah, blah, blah we were stopped in our tracks - she was right! 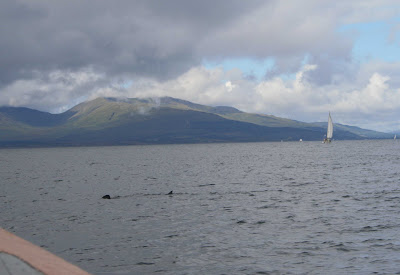 Apparently it was a basking shark the second largest living shark after the whale shark. I would have felt happier in a bigger boat I know they only eat plankton and tend not to bother anyone but still! It was a strange moment.
We took the ferry over to Mull which was an absolutley beautiful island, I'd love to go back there for a holiday. Whilst there we drove down to Tobermory, also known to little folk as Balamory. This was probably my favourite place to visit, lovely walks, tiny beach great for shells, sea pottery and sea glass and hopeless for sunbathing (my favourite sort of beach) and lots of interesting shops selling locally made crafts rather than the usual tourist tat. 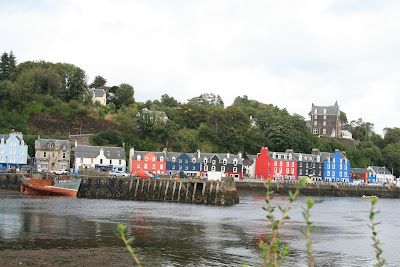 As we wandered around some of the most beautiful places our little island has to offer it was sad to hear so many of the natives whingeing about the weather saying it spoiled their holiday and that next year they would "go abroad as usual" and lots of mention of that ridiculous media invention the 'staycation' as though 'pre credit crunch' (more media speak) British people didn't holiday in Britain.

On the ferry back to Oban we stood on the deck with a brew and planned a future holiday visting more of the Scottish isles. As we watched Mull disappear in the distance this appeared 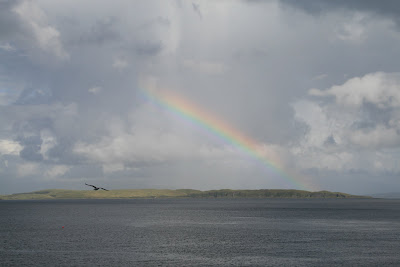 Perfect! And now that we are back and I have got back on top of the orders I had whilst away I hope to be writing alot more here. Lx

So pretty! I love the seals! Will you take me next time?

Hello Leigh,
I love those colouful cottages!
Thank you for your comments too.xx

I used to holiday on the west coast with mum and dad when I was younger. Been to Oban many a time. A lovely part of the world.

I'm so delighted you had a wonderful time in Scotland Leigh! great pics! Haste Ye back :0)