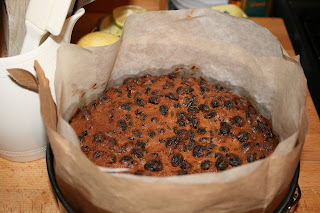 when I baked our Christmas cake.
This later than usual, I generally make it in mid October but with one thing and another...
Here's the recipe - its one I've used a few times, I've adapted it a bit, as long as you keep the wet to dry ratio the same you can play around with it :)
Rich Fruit Cake
Raisins, chopped 250g
Glace cherries, chopped 125g
Sultanas 750g
Dried currants 125g
Prunes, pitted & chopped 70g
Dates, pitted & chopped 70g
Marmalade 2tbs
Brandy 1 cup
Butter 250g
Grated orange rind 2tbs
Brown Sugar 1 cup
Eggs 4
Plain flour 2 cups
Mixed spice 1tsp more or less as you fancy
Day 1
In a large bowl mix together the fruit and half of the brandy.
Cover and set a side 'til tomorrow. If you remember stir occasionally as the brandy may settle.
Day 2
Preheat the oven to 150°C/130°C fan-assisted.
Line base and sides of 22cm / 9 inch cake pan with 2 layers brown paper and 2 layers baking paper, bringing paper 5cm above the edge of the pan.
Uncover the fruit and brandy mixture and add the rest of the brandy and the marmalade, mix well.
In a separate bowl beat butter, rind and sugar with an electric mixer until just combined
Beat in eggs, one at a time, until just combined between additions.
Stir butter mixture into fruit mixture; mix in sifted flour and spice.
Push small spoonfuls of mixture into the edge of the prepared pan then spread the remaining mixture into the pan. Tap pan firmly on bench to settle mixture.
Level the top of the cake with a wet spatula.
Bake for 3 to 3 1/2 hours.
To test if cake is cooked, gently push the blade of a sharp-pointed vegetable knife straight through the centre of the cake to the base of the pan. Withdraw the knife slowly. If there is uncooked mixture on the blade, bake for a further 15 minutes before testing again.
Snip the paper lining level with the top of the cake. Turn cake upside down onto a sheet of foil; wrap cake and pan tightly in foil. Cooling cake upside down will make the cake sit flat for decorating.
Undecorated the cake can be left to mature for around 3 months as long as it is wrapped securely in foil in an air tight container.
Yum.